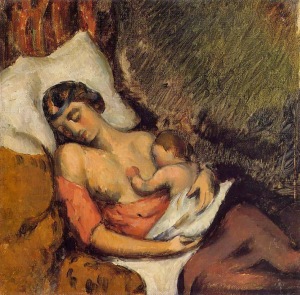 The theory behind biological nurturing or laid-back breastfeeding. Published in New Beginnings.

Learning in Pregnancy
“Breastfeeding is natural but not instinctive; mothers need to learn how to do it.” When I was pregnant I read this many times in various different places. It didn’t make complete sense to me but I knew I couldn’t ignore it — too many people I knew had been unable to breastfeed despite desperately wanting to. So I read the books and attended the workshops — I even went along to a La Leche League meeting. I was prepared, or so I thought…

When my baby arrived, the reality of breastfeeding came as quite a shock and none of that preparation seemed to help. None of the books mentioned the frantic head bobbing that made it so difficult for my baby to latch on. And what was I supposed to do with those little arms that kept getting in the way? Once he got on the breast, my baby’s latch-on looked so perfect it could have adorned the cover of a breastfeeding manual, but it still hurt me.

Biological Nurturing
Several weeks later, still in pain, I had a visit from Suzanne Colson, midwife and researcher at Canterbury Christ Church University and the woman behind the term “biological nurturing.” She got me to lie back and get comfortable on my sofa and then draped my baby on my chest. Again he did his head bobbing thing, but this time there was a difference. He “bobbed” into position and latched on. Lying along the length of my body, his arms were no longer in the way. “How does that feel?” Suzanne asked me. “Er, fine… It feels okay,” I replied, hardly daring to believe the words as they left my mouth. Breastfeeding felt completely different. Having been used to his vise-like grip up to that point, I found it hard to conceive that he was actually getting any milk with this soft sucking.

As my baby fed, like he’d never fed before, Suzanne and I chatted. She explained that he had been displaying the primitive neonatal reflexes that all healthy babies are born with. In the traditional breastfeeding positions — mother sitting bolt upright with baby in cradle hold, for example — these reflexes are often suppressed or even get in the way of a good latch-on. In the biological nurturing positions and postures, these reflexes actually stimulate the newborn to latch on, stay latched on, and feed well.

Postures and Positioning
I was fascinated to know more about the theory behind this approach, so this February I went along to Birkbeck College in London for a one-day workshop run by Suzanne, entitled “Initiating Breastfeeding. The Biological Nurturing Toolkits.” The participants included breastfeeding counselors and teachers with decades of combined experience. I was the only one in the room with no formal training. Most of us were aware of the importance of skin-to-skin contact in the first hours after birth but, as Suzanne explained, it is not the actual skin contact that triggers babies to latch on well. It is the postures that mothers adopt during skin-to-skin contact and the positions they hold their babies in that really matter, she maintains. Mothers generally lie back with their baby in the “tummy-to-mummy” position when they are practicing skin-to-skin, and this is the essence of biological nurturing.

Because the mother is lying back, at whatever angle she finds comfortable, gravity ensures that every part of her baby’s body is closely applied to hers with no gaps between them. When the primitive neonatal reflexes get triggered in the biological nurturing positions, the baby will often latch on chin first automatically, getting a good mouthful of breast, without any help from mom. In the traditional upright and side-lying breastfeeding positions, gravity doesn’t play a role in keeping the baby close so mothers have to apply pressure across the baby’s back to keep him in the tummy-to-mummy position. While there are just a handful of traditional breastfeeding positions (cradle hold, cross cradle, rugby, etc), Suzanne likes to say that there are 360 different biological nurturing positions (thinking of the breast as a clock face). Of course, in practice, some of these may be a little impractical!

Newborn Reflexes
During the workshop we were introduced to a few of the many newborn reflexes that have been identified by neurologists. Some of these, such as the rooting reflex (triggered by touching the baby’s cheek) are familiar and obviously involved in feeding; but Suzanne believes that many more primitive neonatal reflexes have evolved to help babies latch on and feed. For example, if you brush the top of a newborn’s foot he will lift it and place it, so this reflex may help him crawl to the breast. Feet seem to be especially important, says Suzanne: “There is a strong foot-to-mouth connection.” If you stimulate a newborn’s feet it causes him to latch on to the breast and start sucking.

After being introduced to the theory behind biological nurturing, we got to see it in practice as we watched a few of the many videos of mothers and babies Suzanne has recorded over the years. Years ago, Suzanne first noticed that some women seemed to take to breastfeeding naturally and without any help. Driven by the huge surge of oxytocin experienced after a natural birth, these women seemed to be acting instinctively, and biological nurturing was simply what these mothers did with their babies. The videos showed mothers who were being helped to try out biological nurturing positions. It was interesting to see the change that came over them once their babies started feeding in the biological nurturing positions — the mothers would suddenly relax and lose interest in talking to Suzanne. They began preening their babies, gazing at them lovingly, playing with their toes — in other words, nurturing them.

Behavioral State
There is more to biological nurturing than just the mother’s posture and baby’s position. The baby’s behavioral state is also important, explained Suzanne. She has found that the best time to try biological nurturing is when the baby is in a light sleep, when the baby’s reflex movements tend to be smoother. Babies are able to breastfeed in their sleep so there is no need to wake a sleepy newborn for a feed. Of course, it is possible to try these positions when the baby is awake, but by the time he is crying the window of opportunity may have been missed and he may not latch on. Suzanne also recommends round-the-clock biological nurturing for the first three days of a baby’s life, when he is making the metabolic transition from being fed continuously via the placenta to feeding at longer intervals outside the womb. These three days of non-stop biological nurturing can also help whenever there are feeding problems during the first eight weeks, she adds.

Encouraging Mothers to Continue Breastfeeding
The three main reasons that women give for stopping breastfeeding in the first few weeks are problems latching on, sore or painful nipples, and lack of milk. Biological nurturing can help with all three — when a baby uses his inborn reflexes to latch on, he latches on well and sucks deeply. For several decades it has been assumed that the way to encourage breastfeeding is to teach mothers about correct positioning and attachment, but Suzanne claims that this approach has not actually improved the rates of uptake. Mothers and babies both have instincts that enable them to breastfeed successfully, but it can be hard to forget what we “know” and tap into those instincts. Perhaps the new mantra should be: “Breastfeeding is natural, it is instinctive, and some of us need to unlearn how to do it.”