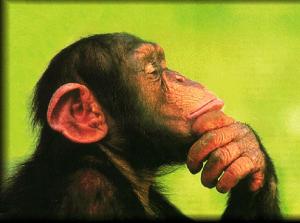 The genetic differences between chimpanzees and humans are tiny. But they could be the key to curing many diseases. Published in The Independent

As the full sequence of the human genome nears completion, scientists now propose that we start all over again – this time with the chimp. Many leading geneticists believe that by studying the subtle differences in the DNA code of human and chimp, we could learn so much more about ourselves. Not only would this be of great help in the study of human diseases and disorders, it would also help us to understand our nearest living relative, an endangered species that is fighting for survival.

The Human Genome Project promises to tell us what it is to be human (at least at a genetic level). But the trouble with “being human” is that it turns out to be an awful lot like being something else. About 90 per cent of our genetic sequence is the same as that of mice, 60 per cent is shared with the fruitfly and even the nematode worm can be said to have 40 per cent of its DNA in common with humans.

It is estimated that we share more than 98 per cent of our DNA with chimps. Yet the chimp is different, says Ajit Varki, a leading supporter of the drive to decode the chimp genome. “The emergence of humans can be regarded as one of the major transitions in evolution and the complete explanation of this phenomenon ranks as one of the greatest unsolved mysteries of science,” he says in the current issue of the journal Genome Research. “There is clear and compelling biomedical value to giving high priority to the complete sequencing of the chimpanzee genome and that of at least one Old World monkey,” adds Mr Varki, who is at the University of California, San Diego.

The arguments go like this. We know that there are clear biological differences between human and chimp which manifest themselves in such things as immunity to certain diseases. Chimps, for instance, do not easily get Aids. There is compelling evidence that many of these differences can be put down to the 2 per cent of the DNA code that distinguishes human from chimp. If we sequence the chimp genome in full and find out precisely what these differences are, we will get a handle on what part of the human genome plays a role in whatever disease we are interested in, whether it is susceptibility to Aids or ovarian cancer.

According to Mr Varki, the close similarity between chimp and human genomes means that there is a strong likelihood of finding genetic explanations for any differences in disease between our two species. Already, geneticists are engaged on a hunt to find the defects in genes that cause disease by comparing different ethnic groups around the world.

“Studies of the chimpanzee genome could be considered a logical extension of the current emphasis on exploiting sequence differences between various human groups to identify important disease-susceptibility genes,” says Mr Varki.

The latest call for a chimpanzee genome project has the support of a wide number of scientists. “In principle, there is a genetic basis for being human, but at the moment we really don’t know anything about that. But we do have the technology for answering that question,” says Edwin McConkey, a molecular biologist at the University of Colorado, who would like to see a chimp genome project modelled on the publicly funded Human Genome Project. “The only way to understand the human genome fully is to take a comparative approach,” says Walter Messier, a researcher at Genoplex, a Colorado-based biotech company that has been comparing key human genes with their chimp counterparts. So far, they have identified differences in two genes – one which they think protects chimps from Aids, and another which has a role in learning and memory. While they wait for their patents to come through, they are forming a spin-off company, Evolutionary Genomics, and expect to profit substantially from the venture. “If a company had a chimp genome, people would be knocking at its door to get access,” Mr Messier says.

A total of $3bn was originally set aside for the Human Genome Project, but advocates of a chimp genome project claim that it could be much quicker and cheaper, since scientists would not have to start from scratch. Elizabeth Nickerson of the Baylor College of Medicine in Houston, Texas, says it is a matter of smart sequencing.

First, she suggests removing the meaningless repetitive sequences of DNA that make up around half the genome. “Then, you could do a low resolution draft of the chimp genome and, using what you know about the human genome, you could go back and look for the genes themselves at high resolution,” explains Ms Nickerson, who plans to test this approach later this year.

In his call for a chimp genome initiative, Mr Varki cites a handful of human illnesses that could benefit from knowing the DNA sequences of the chimp. The chimp’s ability to deal effortlessly with HIV infection is one; its apparent inability to develop anything approaching Alzheimer’s disease is another. This difference is all the more remarkable, he says, because chimps share with humans at least one gene that predisposes some people to develop this form of senile dementia.

Malaria caused by the blood parasite Plasmodium falciparum is another infectious disease that chimps can apparently fight off without much fuss. Yet they are susceptible to another type of blood parasite which is related, called P. reichnowii. “The bulk of the evidence predicts that genetic differences determine at least a portion of the observed differences,” Mr Varki says.

Although the data on this is less sound, it seems that chimpanzees are also far less prone to cancer than humans. Although cancers kill more than 20 per cent of people in developed countries, cancer rates in primates run at about 2 or 4 per cent. “Because cancer is clearly a disease of the genome, comparative genomics should proceed with the objective of identifying which genes might be involved in this apparent difference,” says Mr Varki.

Work comparing the two genomes could be done without harm to any chimp. Indeed, Mr Varki argues that the species could benefit. “Primarily as a consequence of human activities, our closest evolutionary cousins are rapidly dwindling in numbers in the wild to the point where complete extinction of these populations is areal danger,” he says. Knowing their genome should result in a better understanding of these animals and hopefully enhance their care and conservation.

Tags: chimps, genomics, Human Genome Project
From: Biology, DNA, Genomes, The Independent
← Once upon a time in America
Tilting toward windmills →
No comments yet